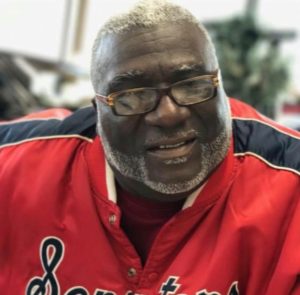 Chances are, if you’ve lived in Ward 5 any time in the last 40 years or so, you’ve met our partner, Andre “Smokey” Lee. He was most recently spotted at Brookland Manor on April 7, helping MidCity distribute hot meals to residents. (Smokey does this one or twice a week at Brookland Manor, along with groceries once a month; other MidCity partners distribute food at the community most other days of the month.)

Community relations has always been Smokey’s professional and personal life’s work. From his first job as community relations specialist for then-Ward 5 Councilman Harry Thomas, Sr., to his current job — same title — at D.C.‘s Office of Cable Television, Film, Music and Entertainment, to his volunteer work leading the Senators Satchel Paige Little League and serving as vice president of a local chapter of one of the largest unions in the country.

Since September, Smokey has been serving his community through what he calls a “food ministry,” distributing donated food and using donor dollars to buy even more. His work is funded in part by a sponsorship from Brookland Manor owner MidCity Financial.

Smokey’s work on the ground now feeds 300 to 400 families each weekend at either Michigan Park Christian Church or Brookland Manor, which is soon to be redeveloped into RIA.

Smokey and Ms. Cece (a resident volunteer) set up for the March 27 food distribution at the RIA Community Center at Brookland Manor.

(RIA will be an inclusive redevelopment featuring grocery, retail and 1,760 residential units — 24 percent of which are designated as affordable housing.)

Smokey’s work with MidCity dates back 2017, and has included career fairs, holiday celebrations and much more, he says.

Of his food partnership with MidCity, Smokey says, “I don’t know if I could do a lot of this without MidCity. They’re not my partners in crime, they’re my partners in Christ. We’re just vehicles doing God’s work.”

Smokey says he sees the RIA redevelopment as a sign of better times ahead for Ward 5. “You gotta be able to adapt to change. All change ain’t great change, but some change is great change. And I think what MidCity is accomplishing is great.”